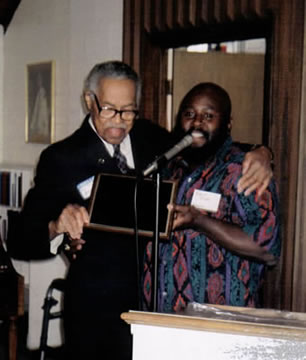 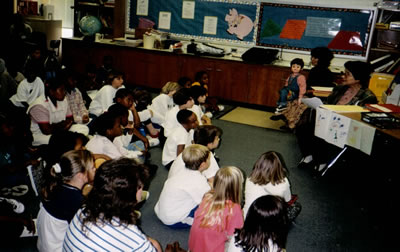 Anne Arundel Peace Action has hosted visits by delegations of Japanese peace activists sponsored by the World Friendship Center in Hiroshima. Their activity-filled stays have included appearances in classes in middle and elementary schools in the county; a visit to a Japanese language class at the U.S. Naval Academy; meetings with elected officials, including the mayor of Annapolis and members of Congress; volunteer work; media interviews; and social events. Several members of the chapter have made similar trips to Japan as part of the same program. In the picture, Michiko Yamane entertains fourth graders with her skills as a ventriloquist as retired teacher Fumiko Sora looks on. 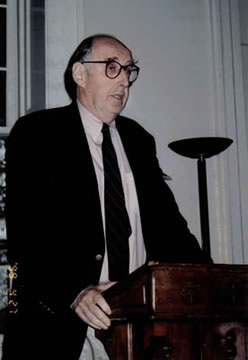 The chapter has hosted talks by a range of speakers, including Marcus Raskin, co-founder of the Institute for Policy Studies; U.S. Rep. Dennis Kucinich, sponsor of the U.S. Department of Peace proposal; Dr. Imad Moustapha, Syrian ambassador to the United States; Adm. Eugene Carroll of the Center for Defense Information; Lt. Col. Robert Bowman, president of Institute for Space and Security Studies and an expert on Star Wars; Anna Baltzer, Fulbright Scholar and author of an eyewitness account about human rights issues in the Palestinian territories; Max Aristide of the Quixote Center and a specialist on Haitian history, politics and culture; and Monica Green and Kevin Martin, national executive directors of Peace Action. The chapter organized a well-attended forum that featured talks by Israeli and Palestinian students about their life experiences, their perceptions of the “other side”, and their thoughts about the prospects for the peace process. Colman McCarthy of the Center for Teaching Peace in Washington, DC (pictured) was among five speakers at a 1960s style teach-in organized by the chapter in 2002 on “What Will Result from a War Against Iraq.” Those who filled the Great Hall at St. John’s College heard what proved to be prescient warnings about the consequences of an attack on Iraq.

In addition to a public address, the chapter often arranges for its guests to talk to high school and community college classes, to participate on radio talk shows, and to speak with the editorial board of area newspapers. 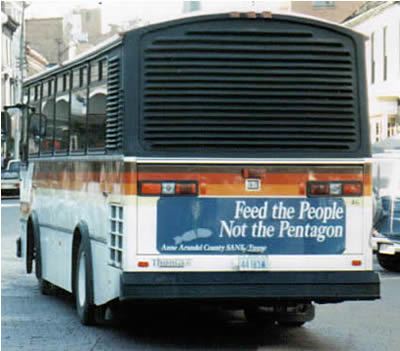 E-mail alerts. Members can receive action alerts by e-mail. This is the most prominent method used by the chapter for keeping its network informed.

Personal meetings. Chapter members have met with elected officials and their aides to promote peace issues.

Bird-dogging. Chapter members raise questions and issues with elected officials at town meetings and other gatherings.

Letters-to-the-editor. Chapter members are encouraged to submit letters to the editor to The Capital-Gazette Newspapers, The Sun and The Post about peace issues and to call “talk radio” shows. 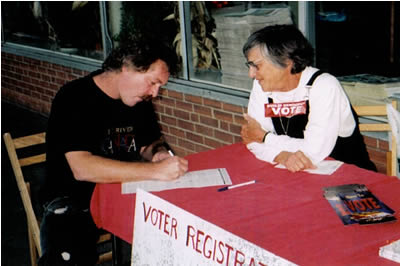 The chapter participates in electoral activities in a number of ways:

Candidate support. The chapter has recruited hundreds of volunteers for candidates at all levels of government who share its philosophy and whom it has endorsed.

Peace Voter efforts. The chapter has organized Peace Voter campaigns which have involved the distribution of voter guides stressing the candidates’ positions on issues of concern to the organization. In 2006, the chapter prepared and mailed a professionally-developed guide in the Democratic primary to all 9,200 voters in the Anne Arundel portion of the 3rd Congressional District who voted in the 2002 and 2004 primaries. The piece contained a short description of the stance on Iraq of all candidates seeking the Democratic nomination in the 3rd District and the two leading contenders for the Senate. In 2004, the chapter mailed a professionally-prepared guide to 10,000 targeted households in the country which compared the positions of the major party presidential candidates on key peace and social justice issues. In 2001, the chapter prepared and distributed more than 2,500 guides containing the stands of the general election candidates for mayor of Annapolis on local public policy issues related to social justice.

Register for Peace Campaigns. The chapter has sought to increase the number of progressive voters at the polls by holding voter registration efforts in strategically-chosen areas of the county. In the picture, Sandy Curry signs up a new voter. 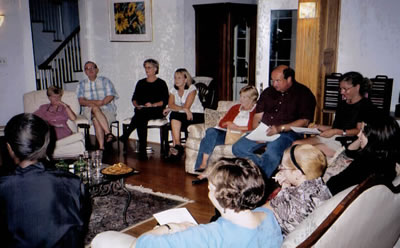 The chapter sponsors periodic discussion programs based on films or written materials. Pictured is an event held on the anniversary of the September 11 attacks to address the issues arising from the event. Those taking part discussed four alternative options for how the United States should move forward in the future in shaping its national security and relationship with the world. 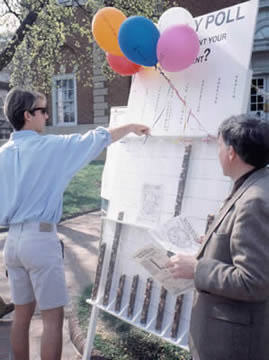 Vote with Pennies for taxpayer agenda

The chapter has used a variety of approaches, including a priority poll in which passers-by can “vote” with pennies on how they want their tax dollars spent (pictured here), street theater, “Burma-shave” style advertisements, and attention-drawing displays.

Anne Arundel Peace Action’s Peace Booths have acquainted thousands of people with the chapter’s work. We have tabled at the:

Events we have tabled continues: