The chapter has established a rapid response network that is activated upon news of organized hate group activity in Anne Arundel County. The idea behind the network is that every time a hate group makes an appearance, people of conscience in the community should have a presence in support of racial harmony, unity and tolerance at the same place – and let the media and public officials know about it. When the Ku Klux Klan thrust literature demanding “white power” into cars of surprised motorists stopped at a traffic light in Pasadena, 30 people showed up at the place a few days later carrying signs opposing bigotry and handing passers-by and motorists anti-racism literature. Those pictured were among the participants, who drew enthusiastic support from passing motorists all day. The chapter also has countered the distribution of racist, anti-Jewish and anti-immigrant flyers by a neo-Nazi organization in neighborhoods around the county by passing out flyers which denounced the hate literature, called on residents to ignore it, and advocated racial and religious tolerance and understanding.

Soon after the September 11 attacks, the chapter held a well-attended press conference, attended by religious leaders and representatives of civic organizations, to urge support for local Arab Americans, Muslims and people of Middle Eastern heritage. The chapter sponsored a two-day workshop about how individuals learn and perpetuate racism and how racism is institutionalized in our society. The chapter undertook a year-long project to identify ways in which it can improve its anti-racism activities and increase its attraction to minorities. As a result of one of the recommendations made at a workshop which was part of this process, the chapter has made a conscious effort to consider how its programs, activities and literature can be made more appealing to racial/ethnic minorities. 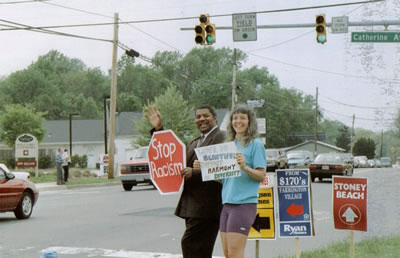